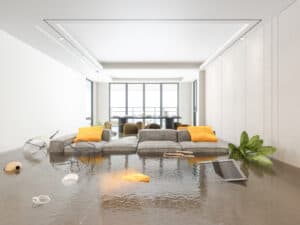 One of the often underestimated consequences of a flood is the terrible smell it can spread throughout your home. These odors can be exceptionally hard to remove and pose a complication for your weeks and even months after the initial flood took place. Living in a smelly home is obviously one of the last things that anyone wants to deal with. To prepare you for this possibility if your home is ever flooded, it is important to know what the sources of the nasty odors from a flood can be. According to our water damage restoration experts at FireWater Restoration in Bellevue, WA, below are three of the most common causes of smelly homes after a flood.

No surprise here! Floodwater commonly contains contaminants and in severe cases that contamination contains sewage. In addition to the odor, sewage in floodwater also poses a major health hazard. Most, if not all, ordinary household cleaners are not strong enough to eliminate the smell from sewage. For this kind of cleanup, you should always turn to the water damage restoration experts for help. Attempting this on your own will not only be less effective, but it will also be dangerous.

As floodwaters move through an area, they may pick up chemicals from outlying industrial areas, flooded garages, and sewers. Your walls and flooring can absorb these chemicals during the flood and retain strange or foul odors for weeks afterward. The odors from this can vary drastically due to a large number of chemicals that the floodwater in your home could have assimilated. Professional restoration and deodorization can be your best defense in removing these smells and ensuring they do not return. Again, professional cleaning is also important since these chemicals can be very hazardous. You don’t really know what is in the floodwater so it is best to leave it to the pros to keep you safe.

Mold is by far the most common issue homeowners encounter after a flood. This is largely due to the fact that mold can begin growing as soon as 24-48 hours after a flood. Thus, in just a short amount of time, a flood can transform your home into an area contaminated by mold and dominated by a gross, musty odor. While the types of mold that can grow in your home may vary, the resulting musty odor is the same. If you detect a musty odor during or after the water damage restoration process you should notify water damage and mold remediation professionals right away. Mold can be very difficult to eliminate once it spreads so it’s important that you take care of it without delay.

Gross odors caused by a flood are often the last thing on anyone’s mind during the water damage restoration process. However, this shouldn’t be taken for granted so you don’t have to deal with these pervasive odors long after the original flood. At FireWater Restoration in Bellevue, WA, we also provide thorough odor removal along with our water damage restoration services.